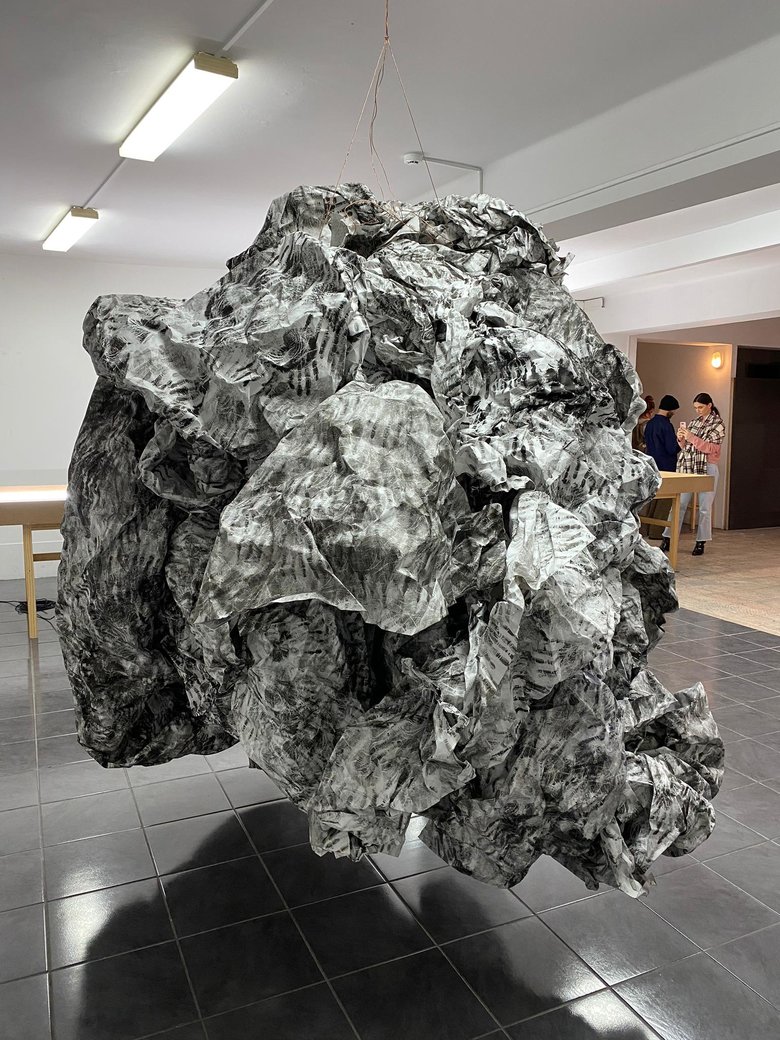 A Rumble in the Jungle (2019). Jabulani Maseko. Courtesy: Bruno Leitão

Before even knowing what was going on, he had already crawled into me.

I had just stepped into the building and was standing in front of the staircase that would lead me to the top floor. Third, I think.

There is sound coming from above.

Through it, I unknowingly absorbed him. And as unexpected as the meeting was - as unprepared it hit me. Once inside me, he continued to move frantically, banging with his open hands against the walls of my seemingly hollow insides. Was that an echo?

"Don't punish me with brutality".

Once at the top floor, I get the whole picture.

The sound: a dry slap on the cold tile floor.

The rhythm is at times focused, energized, and uplifting, then again it reveals traces of tiredness and struggling effort, never-ending.

Standing next to the infinite paper: the ink. Apparently enough to give colour and form to what I usually conceive as my invisible and ungraspable inner being. The paper-white as it was, black as it is becoming - lies there, giving in, totally resilient to the man's restless activity.

As I watch him, his trance-like movements hypnotize me.

Before I know it, my inner life is coming out of the pores of his hands.

Faster, slower, groovy or heavily breathing, emotions of all kinds flow through the space in the form of rhythm. Are they his? Are they mine? Sound-songs. Rhythmic noise. Jumps, diagonals and spirals.

After three hours of continually printing his hands onto the paper roll from both sides and having filled every inch of it, Jabulani starts forming it into a round object. He's tired but triumphant. His activity reminds of the Sisyphus-myth, some will say after. Never before, though, had this used and abused image such impact. He rolls the resistant paper. Folds its stubborn edges into the heart of the forming ball. He bends over, leans in, embraces and covers the beast with his whole body. A one-on-one battle towards domestication. At times, the material gives in and Jabulani takes over whatever came out of him before. He has the control and the ball rolls as he commands. He keeps on folding and forming. Relief. The beast is tamed.

Then, after a short pause, he starts unfolding it again. With wrinkles, but still, in one single piece, the paper slowly grows back into its original shape. It takes over the space. This time it seems somewhat less powerful, already molded and revealing the memories of its history through its countless folds. Nevertheless, it continues to resist the outer impact as if having a will on its own. By outgrowing its master, it discloses a potential to develop its own life. It seems to preserve an immeasurable strength.

Could it take over us?