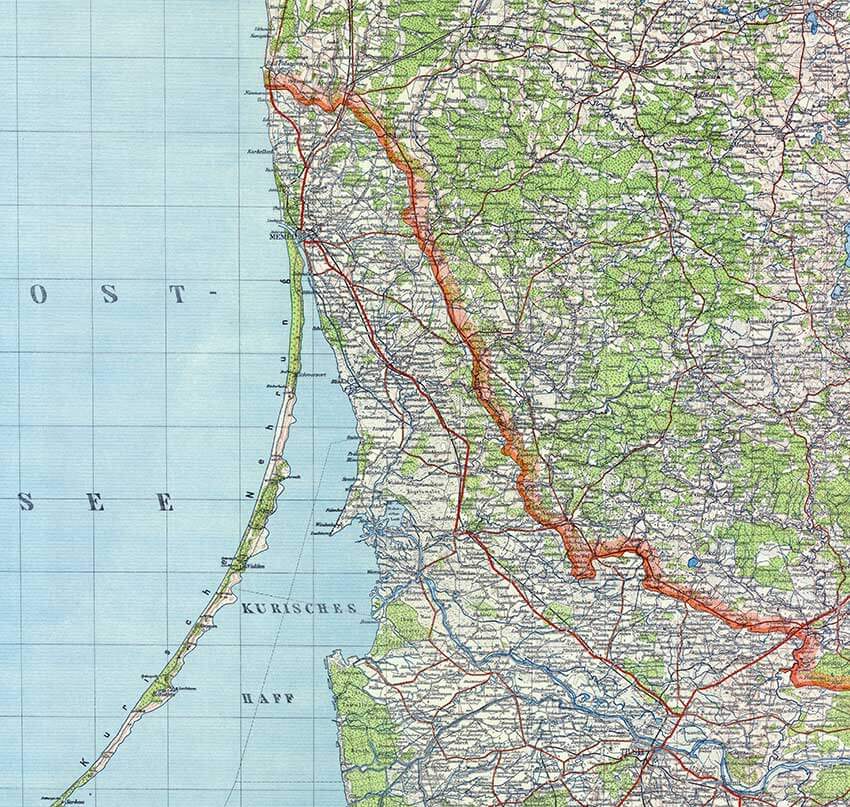 Fragment of the overview map of Central Europe (Übersichtskarte von Mitteleuropa), M 1:300000, sheet R56 Tilsit, produced by Prussian Topography Service (Königlich Preußische Landesaufnahme) in 1902, reproduced in 1940 (last changed made in 1939) by the Topography Service of German Empire (Reichsamt für Landesaufnahme). From the collection of the Institute of Baltic Region History and Archaeology of Klaipėda University.

Final description of the residency:

Nida Art Colony (NAC) is located on a 100 km long and 2 km wide Curonian Spit linking Kaliningrad (RU, formerly Königsberg) and Klaipėda (LT, formerly Memel). Before WW I the peninsular and the Western coast of Lithuania belonged to German Empire, in 1923 it was annexed by Lithuania, in 1939-1945 it was part of Germany again. At the end of WW II, in 1944-1945 the local German population was expelled by force by the occupying Soviet forces. A mass of more than 40 thousand refugees from Memel and its surroundings passed the Spit on their way to the West. In 1956 84% of the residents of Curonian Spit were new settlers from all corners of the Soviet Union. Almost everybody of the remaining 16% of old residents left after an agreement between GDR and USSR regarding repatriation of German nationals was signed in 1958. Thus the peninsular became an area inhabited by rootless community, a place without history, a no man’s land. This dramatic passage of local history is hardly known to Lithuanian residents. In the mood of hostility towards the new refugees from Syria and other countries prevailing in nowadays Lithuania this historical passage seems to be an important and relevant reference to displacement catastrophes that happened at our own door.

NAC is collaborating with Dr. Vasilijus Safronovas – a researcher from the Institute of Baltic Region History and Archaeology of Klaipėda University – to do a survey (historical data, visual material) on emigration and immigration to the peninsula after WW II. The survey will be further used in the project by artists-in-residence and workshop participants in 2019. Artists-in-residence will ground their artistic projects on the material presented in the survey. Their works will be presented at the exhibition on displacement and settlement at Nida Art Colony in 2020.

The research will encompass a one-month-long residency at NAC and eleven-months-long research at Klaipėda University. The research residency starts in September 2017. The survey in two languages – Lithuanian and English – will be ready in the fall of 2018. It will be available both on-line and as a publication, distributed for free. 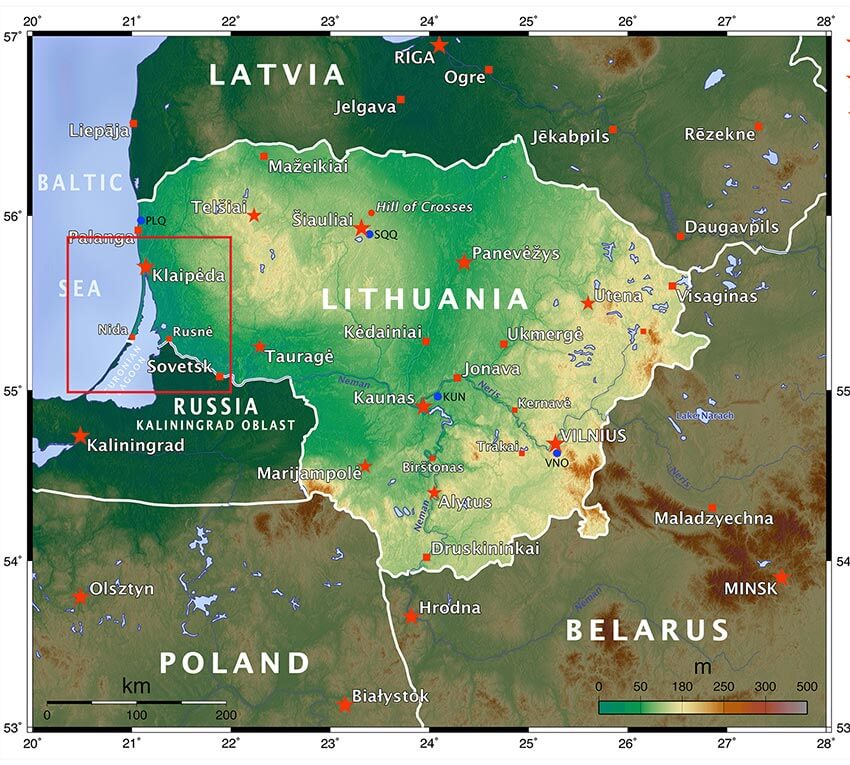 Map of the research area in the present. Area represented on the historical map is in the red square (http://lithuaniamap.facts.co/lithuaniamapof/lithuaniamap.php)

The researcher from the associated partner institution – Klaipeda University – Dr Prof Vasilijus Safronovas did a research and wrote a historical study on immigration to and emigration from the Curonian Spit during and after the Second World War. This is an original research, never conducted before. The researcher used historical documents from archives, libraries and private collections. The study is illustrated with unique and authentic visual material – photographs and copies of documents. It was written in Lithuanian and edited. At the moment it is being translated into English. VAA Nida Art Colony is going to publish two books – one in Lithuanian and one in English. The Lithuanian edition is being designed, it will be published before Christmas 2018. The English edition will be published in February 2019.

The digital version of the publication is available here (EN) and here (LT). 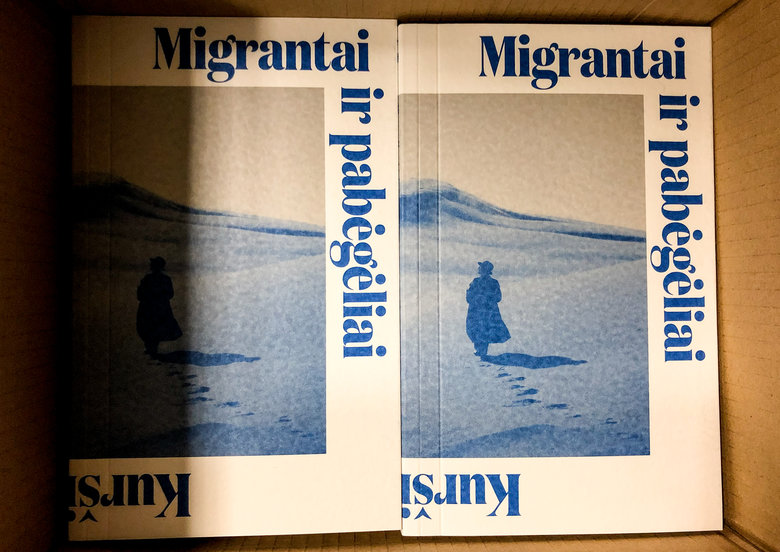 Aspiring to become a bibliographic rarity, the book will be later translated to English and available at Vilnius Academy of Arts bookstore in Vilnius, Nida Art Colony, and Thomas Mann Museum in Nida.

Carried out by Vasilijus Safronovas with the scholarly research subdivision of Klaipėda University Institute of Baltic Region History and Archeology. Initiated by Nida Art Colony of Vilnius Academy of Arts.

The study was completed with Klaipėda University as an associated partner.

Funded by 4Cs: From Conflict to Conviviality Through Creativity and Culture and Lithuanian Culture Institute.

Co-funded by the Creative Europe programme of the European Union.

Dr Vasilijus Safronovas, principal investigator and professor at the Institute of Baltic Region History and Archaeology, Klaipėda University. In 2011, he defended his PhD thesis ‘The Competition of Identity Ideologies in a City of South-Eastern Baltic Sea Region: the Case-Study of Klaipėda in the 20th Century.’ The work was awarded with the Lithuanian Society of Young Researchers Prize (2012) and the Immanuel Kant Scholarly Prize (2012) founded by German Federal Government and was later issued in three different languages.

Safronovas has published widely on issues of memory, identity, and cultural contacts. His record of publication includes several books and over 40 articles in professional journals and collected volumes published in Lithuanian, Polish, German, French, Russian, and English languages. His recent monographs include Kampf um Identität. Die ideologische Auseinandersetzung in Memel/Klaipėda im 20. Jahrhundert (Wiesbaden: Harrassowitz Verlag, 2015) and The Creation of National Spaces in a Pluricultural Region: The Case of
Prussian Lithuania (Boston: Academic Studies Press, 2016). Safronovas is also editor or coeditor of nine collected volumes.
Safronovas is a member of the International Society for First World War Studies and the Association for the Advancement of Baltic Studies.
Currently, he manages the project ‘Remembrance of the First World War: A Comparative Analysis of Lithuania and East Prussia (before 1939)’ conducted at the Institute of Baltic Region History and Archaeology of Klaipėda University.