Akhbari's research revolves around the legends of ‘edible earth’ in connection to purported paranormal activities in the strait of Hormuz, Persian Gulf. Inspired by a medieval illustration of a Portuguese courtyard on the Island of Hormuz, he looks at the ways in which myth-making plays a significant role in shaping the socio-cultural identity of trade-centric geographies. Historically, the archipelago between the Persian Gulf and the Oman Sea played a significant role in the logistics of trade along theSilk Road. The presence of multiple actors along these routes created an early Internationalism that marked a hybrid cultural milieu, which in-turn allowed for a complex exchange of oral stories amongst everyone frequenting the region. In the 16th century, during Portuguese colonial campaigns, tales about the existence of supernatural forces flooding European settlements in Hormuz circulated widely; and subsequently were depicted in the famous Códice Casanatense as a “technology against the intense heat!” Simultaneously, rumours about Hormuz’s inhabitants as lustful ‘earth eaters’ were rampant, giving rise to a series of odd phantasmagorias that facilitated the ‘othering’ and moral justification of colonial endeavours in the peripheries of the Indian Ocean. In the contemporary context of accelerated multinational militarism in the aforementioned region, various accounts of paranormal sightings in the sky and on the horizon have contributed to new transcendental narratives that take inspiration from these old colonial myths, ultimately, connecting old fictions to new struggles.

Akhbari's goal for pursuing this line of investigation is to unsettle common political interpretations of middle-eastern industrial expansion as either a natural capitalist miracle or an unfortunate resource curse. Instead, he aims to highlight the role of constructed fiction in facilitating imperial occupation and to find a critical lens to unpack the spectres of various mythologies in the upkeep of neo-imperial hegemonies and continued proxy battles over ancient trade networks. 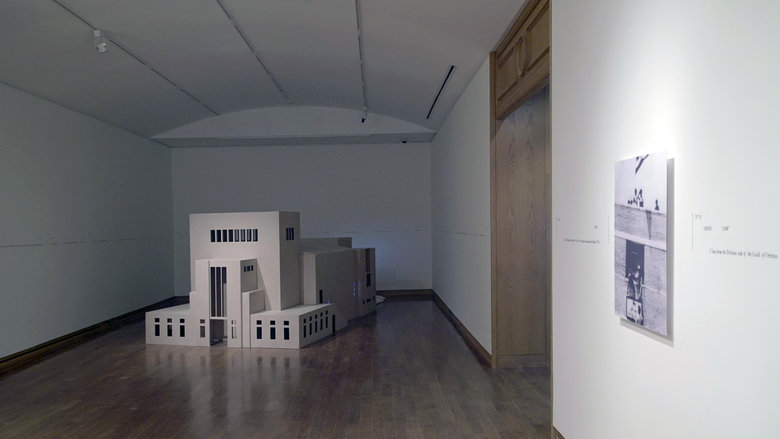 Prizes from Fairyland follows the serpentine history of hydrocarbon extraction in southern Iran alongside the stories of ancient chimeric forces present in oil-rich Mesopotamia. The exhibition consists of a video installation shown inside the model of Abadan's British-designed cinema Taj, two lenticular works combining archival photos of 1951 Iranian oil-nationalization with their contemporaneous mechanical media reproductions and an accompanying novel weaving the narrative threads present in the exhibition.

Rouzbeh Akhbari is an artist working in video installation and film. His practice is research-driven and usually exists at the intersections of political economy, story-telling and critical architecture & planning. Through a delicate examination of the violences and intimacies that occur at the boundaries of lived experience and constructed histories, he uncovers the minutiae of power that organizes and regiments the world around us. Akhbari was trained as a sculptor at OCAD University and holds a graduate degree in visual studies from University of Toronto's School of Architecture, Landscape and Design.

More information about the artist here.