The Fold(s) is a curatorial project composed of four books operating as four individual exhibitions. Under the artistic direction of Luísa Santos, The Fold(s) was developed in the context of the Seminar in Curatorship by the MA and PhD students in Culture Studies of the Lisbon Consortium, Faculty of Human Sciences, Universidade Católica Portuguesa.

The books were designed by Raquel Guerreiro.

You can access the books by clicking on their titles in this post or in the 4Cs "Publications" section. 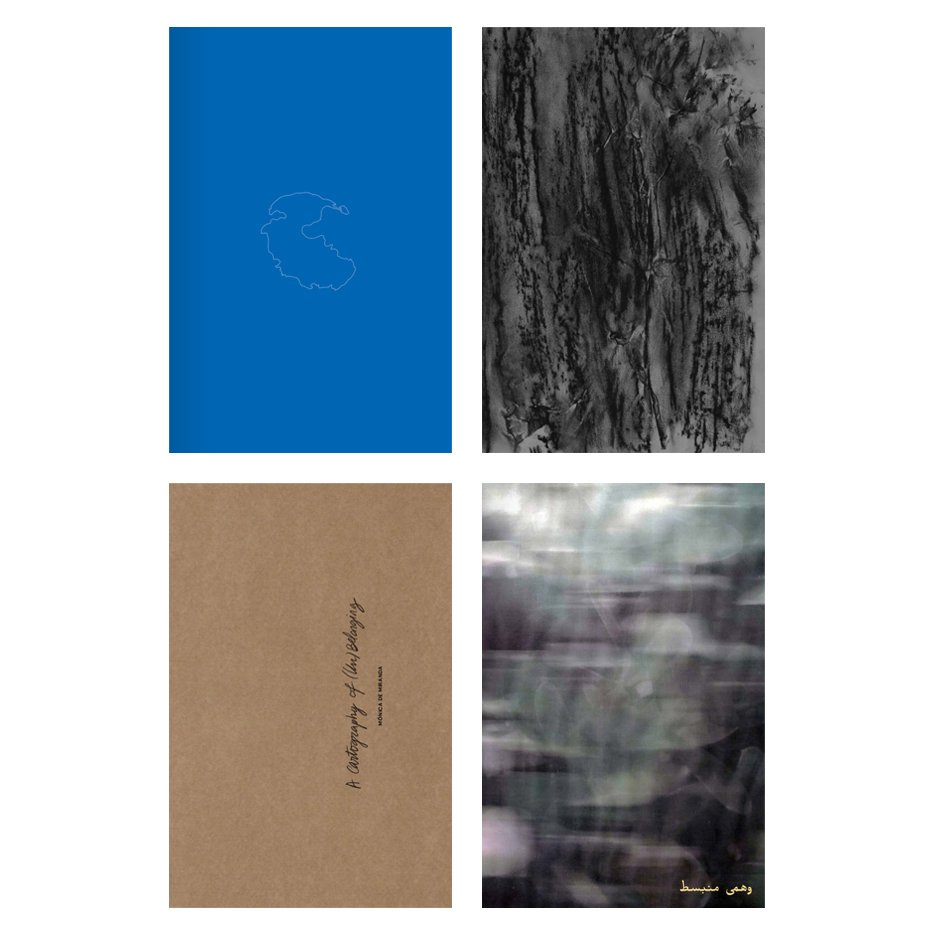 The Fold(s) adopts Deleuze's concept of the fold (1993) in its both ethical and political dimensions, for as Deleuze remarks the emergence of new kinds of struggle inevitably also involves the production of new kinds of subjectivity, new kinds of fold (Deleuze has in mind the uprisings of 1968). This project is grounded precisely on the production of subjectivities via the lenses of the artistic production and research of Carolina Grilo Santos, Joana Patrão, Mónica de Miranda, and Rouzbeh Akhbari. Emerging from a series of micro-narratives, these subjectivities translate the transforming potential of imaginative audacity and exchange while challenging the multipolar structures and the (grand) narratives.

"It is said that science is not romantic. Pangaea (2021), by Carolina Grilo Santos, brings together science and poetry, adding an emotional layer to scientific thinking and notation. This work is grounded on the idea of coming together. Pangaea was the supercontinent that split into all the existing continents, over 175 million years ago. Scientists predict it will reform in about 250 million years as Pangaea Proxima. In this book-exhibition, Carolina combines the rational and the emotional in an exploration of the human production of knowledge about Nature. It is a work that grew from the idea of an expanded science that utilises representation and quantitative techniques to engage in sensorial and qualitative experiences that develop awareness of physical realities through the lenses of the senses, feeling and intuition. It is designed as an experience of an intuitive knowing of the World."

"Arboroscene: reflections on decay is the result of a long and intimate contemplation of a dying apple tree. The title reflects on an alternative way to look at things: de-linking ourselves from our human centric interpretation of life we live by today.
The title reveals different levels of comprehension. Arboroscene is ambiguous by its written polyvalence and thus calls into question our own cosmovision. The era we currently live in has been described as the Anthropocene: an interval in which human impact and existence take the forefront in the universe. Playing with the latin root of the word tree— arbor—Arboroscene is a change of perspective: how would we perceive our environment if we decentred ourselves and contemplated the tree as an axis, rotating and impacting its surroundings?"

"A Cartography of (Un)Belonging (2021) takes its origin from an inquiry on possibilities of action for a decolonization of map-making practice. Indeed, Mónica de Miranda’s Post-Archive (ongoing since 2010) is a research reflecting on borders, landscapes, places, and spaces, namely the demolished neighborhoods in Lisbon that develop along the Military Road and that have slowly been torn down, and hidden by on-going real estate speculation.
A reflection on affective memories of migration from Africa rather than a cold mapping practice, the visual journey presented in this book is one impregnated with emotions, felt by the mapmaker when drawing the map and bringing out her research, and the one felt by the people that used to live in the represented neighborhoods. Through a decolonizing act that seeks to re-create a space of belonging and community, Mónica de Miranda resists the dogmatic mapping practices activating, and arising perceptions, questions, and emotional responses through aesthetics, nostalgia and the information conveyed."

"We’ve managed to decipher the numbers that flashed across our screens. They were geographic coordinates for two sites in Ontario (Canada) and Khuzestan (Iran), both of which correspond to the locations of Akhbari’s site-specific works that Azadeh was analyzing. The Observatory for Riparian Repose (2019) is an installation located in Mississauga, near Toronto, where we assume she started her research. Inspired by the bâdgirs, a cooling system used in hot and humid regions of Iran, Akhbari created a work that invites contemplation of the elements: of wind and water, and perhaps most prominently, of the sun. Approaching his work in 2130, Azadeh discovers only residues of this installation—she merely finds the cement pylons that anchored the towering installation, alongside fragments of ceramic miniatures."