Dwelling on the Threshold is a three-day workshop at Nida Art Colony exploring the potential of spaces of passage, flux and fluidity. Not only is the name of Nida derived from the Old Prussian word for ‘fluent’, but the settlement itself was moved several times throughout the history to escape the constant threat of the sand drifts. The Couronian Spit, where Nida is located, is, geologically speaking, an ephemeral coast element and home to the highest drifting sand dunes in Europe. Similarly, the political borders in the vicinity of Nida were redrawn many times throughout the centuries, currently placing Nida as the westernmost point of Lithuania and the Baltic states, yet on the border with the Russian exclave of the Kaliningrad Oblast, which is also an EU and Schengen Area border. Nida is an ideal place to convene to think together about questions of continuity and disruption, survival and extinction, trauma and healing, colonisation and resistance, and settlement and displacement in relation to art’s role in society. Local histories and struggles will serve as departure points for conversations and practices bridging the pressing issues today near and far and considering when to surrender to inhabiting a floating space full of slippages and when to make a stand. 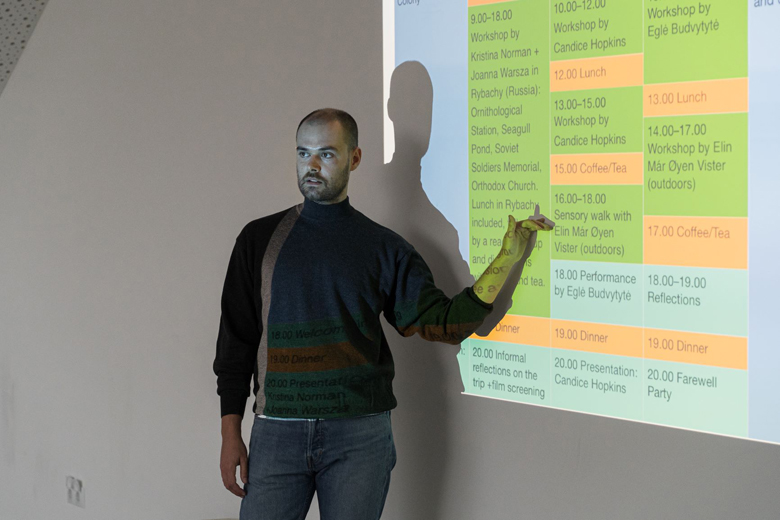 Three half-day workshops will be conducted by curator Candice Hopkins, artist Jesse Darling, and curator Joanna Warsza with artist Kristina Norman (a joined workshop), who will also present their work in evening presentations. Complementary shorter afternoon workshops will be lead by two artists in residence Eglė Budvytytė and Elin Már Øyen Vister. The workshop is organised by Nida Art Colony as a part of 4Cs: From Conflict to Conviviality through Creativity and Culture, a European Cooperation Project co-funded by the Creative Europe Programme of the European Union.

In recent years the EU citizens have enjoyed the disappearance of border controls, while the EU itself has made its external frontiers more and more impenetrable. The Curonian Spit is perhaps one of the most curious examples of border making and border crossing in Europe, where borders are literally drawn on sand. Originally, in the 17th century, the settlement of Nida was located in what is now Kaliningrad Oblast, changing its location on a few occasions, just like many other villages, due to the movement of the sand dunes. In the last few years, this checkpoint (established in 1920 and again in 1991 upon dissolution of the USSR) was impassable without a heavy visa paperwork. Yet since a few months, it became more porous again by introduction of free e-visa procedure.

The workshop will take the form of a collective border-crossing practice by public transport. We will travel from one dune to another, from the Lithuanian Sahara on one side to a biological station on the other, from the EU to the Russian Federation, or just as the school kids from Nida in the 50s on a school trip to remains of East Prussia. The participants are invited to bring with them a textual or visual reference contextualising the act of border crossing and the experience of migration. Together, in small groups, we will construct a common reading and visual references on the current politics of borders and migration affecting people, but also other species, such as birds, or inorganic grains of sand blown across the border.

Practical note: The participants are asked to wear suitable clothes for both indoors and outdoors activities including possible rain, and to secure free e-visa for visiting the Kaliningrad Region. 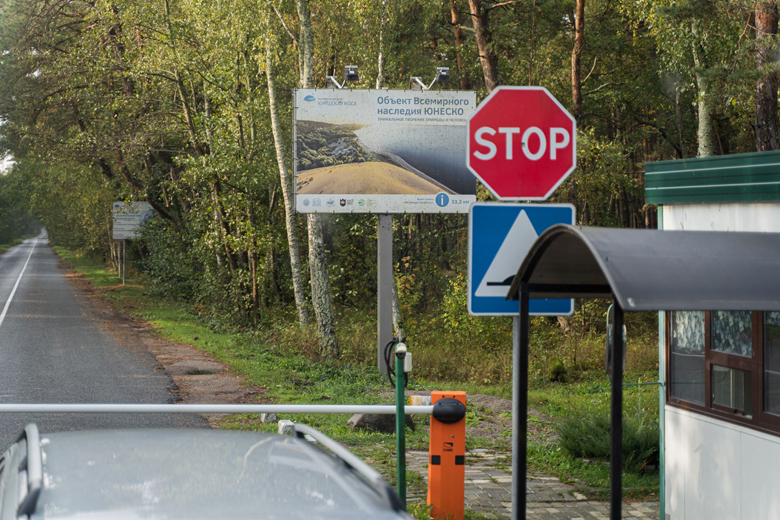 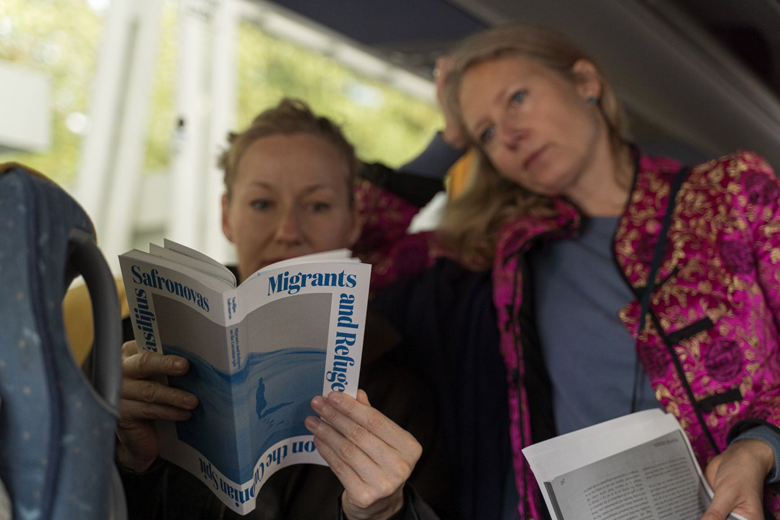 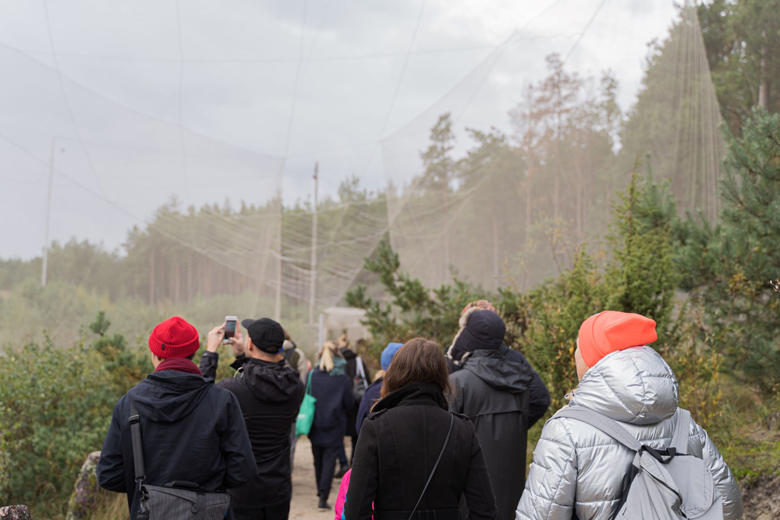 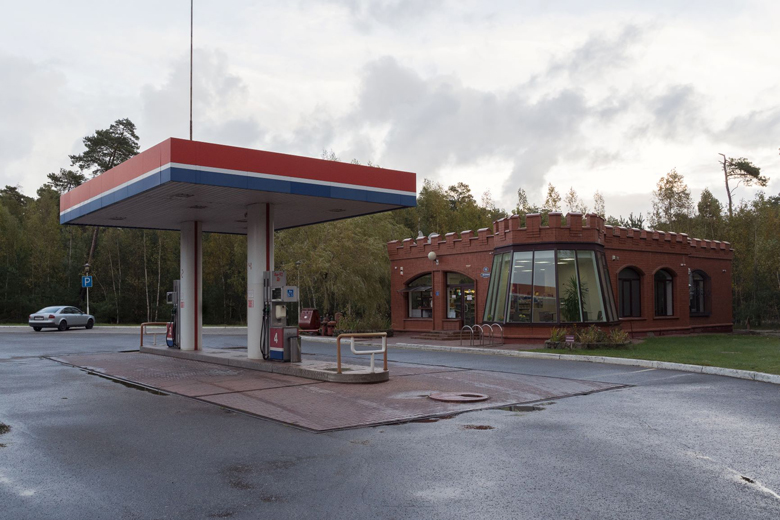 Border-Crossing from Nida to Rybachy (and back) with curator Joanna Warsza and artist Kristina Norman. Photos by Andrej Vasilenko

During the workshop, we will contemplate, listen/sense/feel and discuss together what a non-hierarchical listening methodology or listening artistic practice could be like. We will take a sensory walk in the surrounding landscape where we will do one or more deep listening meditations along the way. Listening is a fundamentally relational act and it is also a therapeutical and potentially transformational act. We will talk about listening to ourselves and our bodies, to each other, to our communities (human and non-human) and to the environment.  We will talk about listening and sensing as care and as a tool of paying attention to the past, the present, and beyond the Western construction of linear time. Before we begin the sound-walk I would like to introduce a few listeners such as the American composer Pauline Oliveros and her “deep listening” practice, as well as the indigenous listening poetics of the Sámi artist-poet-musician-philosopher Nils-Aslak Valkeapää. 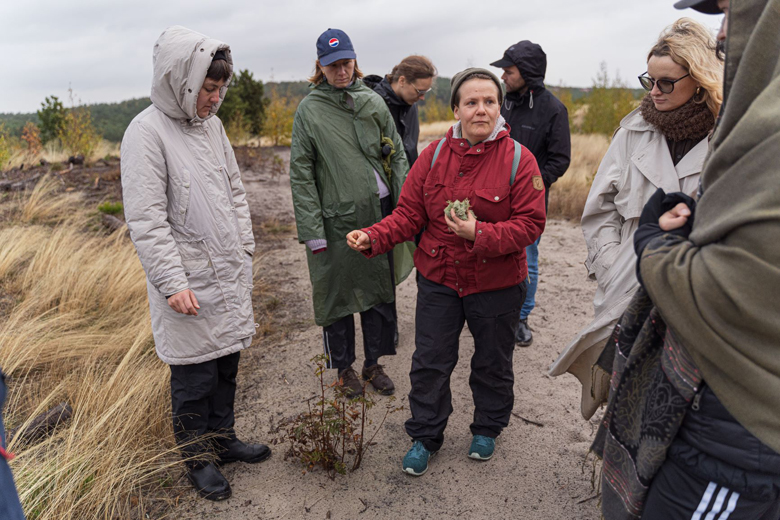 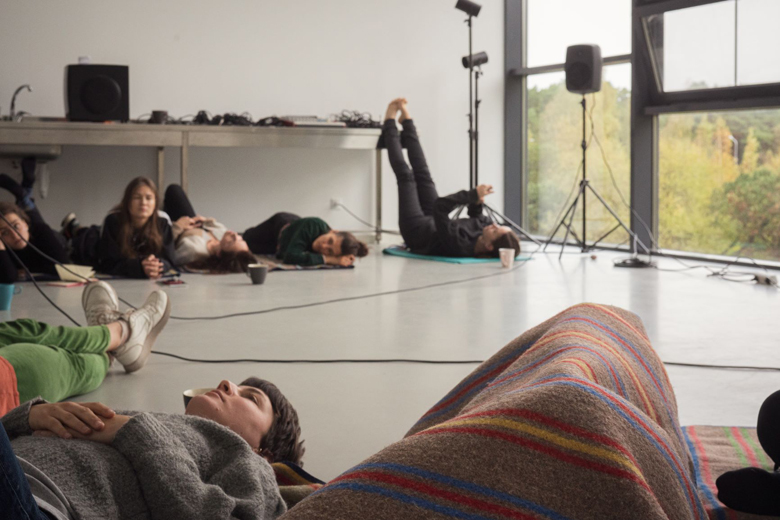 The Pleasure of Being Dragged
Workshop by artist Eglė Budvytytė

During the workshop, we will explore the ideas of passage, care and attention through the lenses of somatic practices. In the first part of the workshop, I will share some guided sessions around the bodywork, focused on witnessing, listening, observing and touch. The second part of the workshop will comprise a dragging practice (a practice derived from the performance Some were carried, some – dragged behind, 2015.) The aim is to practice a sense of gravity, trust, and care and try out different perspectives and angles (non-vertical) of looking at the word. We will practice dragging as a gentle and slow gesture, and try out multiple ways how the body can be dragged without hurting it and causing discomfort. We will explore the pleasure of being dragged. We will also employ the act of dragging as a way to move and be moved through space, to traverse different surfaces, (possibly both indoors and outdoors) with a different sense of agency. 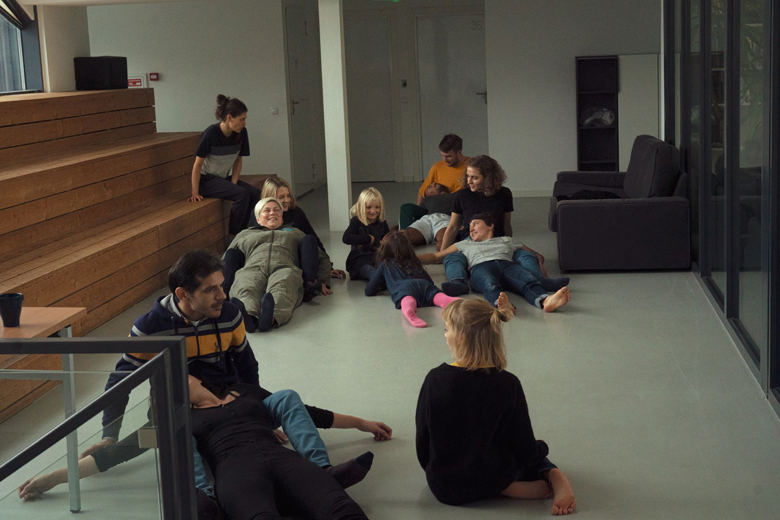 The Pleasure of Being Dragged by artist Eglė Budvytytė. Photo by Tomasz Sekular

Candice Hopkins is a curator and writer originally from Whitehorse, Yukon. She is Senior Curator of the Toronto Biennial of Art (2019). She was co-curator of the SITE Santa Fe biennial, Casa Tomada, a part of the curatorial team for documenta 14 in Athens, Greece and Kassel, Germany and a co-curator of the major exhibitions Sakahàn: International Indigenous Art, Close Encounters: The Next 500 Years, and the 2014 SITElines biennial, Unsettled Landscapes in Santa Fe, New Mexico. Her writing is published widely and her recent essays and presentations include “Outlawed Social Life” for South as a State of Mind and Sounding the Margins: A Choir of Minor Voices at Small Projects, Tromsø, Norway. She has lectures internationally including at the Witte de With, Tate Modern, Dak’Art Biennale, Artists Space, Tate Britain and the University of British Columbia. She is the recipient of numerous awards including the Hnatyshyn Foundation Award for Curatorial Excellence in Contemporary Art. She is a citizen of Carcross/Tagish First Nation.

Jesse Darling is an artist working in sculpture, installation, video, drawing, text, sound and performance. They live and work in Berlin. Their work is broadly concerned with what it means to be a body in the world, though what that means is both politically charged and culturally determined. Their practice draws on their own experience as well as the narratives of history and counter-history. To be a body is to be inherently vulnerable, which extends to the “mortal” quality of empires and ideas as a form of precarious optimism - nothing and no one is too big to fail, and this for JD is the starting point for a practice in which fallibility and fungibility are acknowledged as fundamental qualities in living beings, societies and technologies. Recent projects include the participation at the 58th Venice Biennale, Venice (2019), a solo show ‘Crevé’ at Triangle France - Astérides, Marseille (2019), a solo show as part of Art Now, Tate Britain, London (2018), and a participation in ‘A Cris Ouverts’, Biennale d’art contemporain, Rennes (2018).

Joanna Warsza is a curator, researcher, and writer specialised in interdisciplinary public art, examining social and political agendas, such as the invisibility of the Vietnamese community in Warsaw, the phenomenon of the Israeli Youth Delegations to Poland (with Public Movement), or the legacy of post-Soviet architecture in Caucasus. She is an artistic director of Public Art Munich (2016-2018), and curated among others the Public Program of Manifesta 10 in St.Petersburg, the Georgian Pavilion at the 55th Venice Biennale and she was associate curator of the 7th Berlin Biennale on the invitation of Artur Żmijewski.  She edited of number of publications such as Stadium X-A Place That Never Was (2009), Forget Fear (2012) and I Can’t Work Like This. A reader on Boycott in contemporary art (2017) and A City Curating Reader (2018). Since 2014 Joanna is also a head of the curatorial program CuratorLab at Konstfack University in Stockholm. She lives in Berlin.

Norman’s work is devoted to the exploration of the political potential that contemporary art offers in dealing with the issues of human rights and the politics of memory. As part of her academic research on memory and human rights in contemporary art, Norman produced projects involving site-specific video installations and public interventions, focussing mainly on the use of narrative memories of the protagonists. In these works, the artist explores the ethical dimension of juxtaposing of different historical and geographical contexts and draws attention to the transnational nature of memory in the age of mass migrations. Kristina Norman participated in Manifesta Biennial in St.Petersburg (2014), Aichi Triennale of Japan (2013), Venice Biennial (2009), Baltic Triennial in Vilnius (2009), and Berlin Biennial (2008). Her works belong in the collections of Kiasma Contemporary Art Museum of Finland, KUMU Art Museum, and Tartu Art Museum of Estonia. 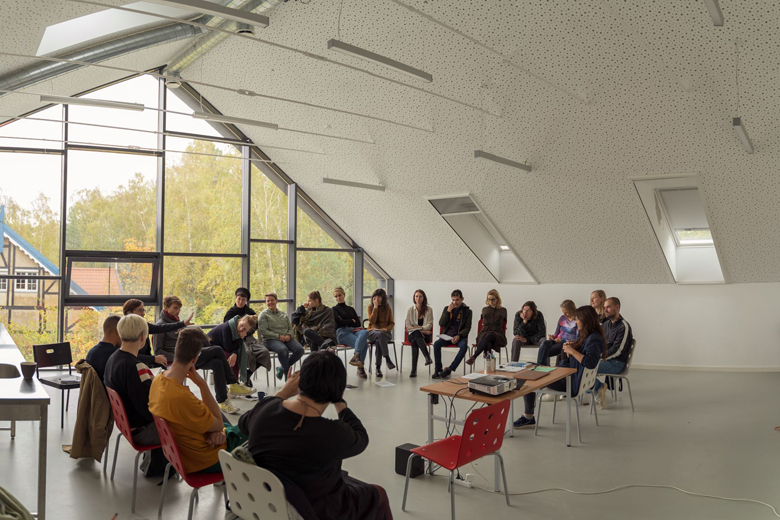 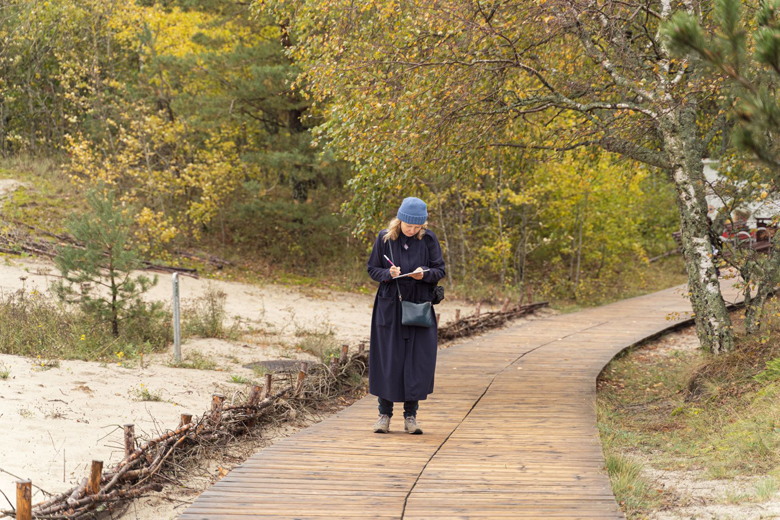 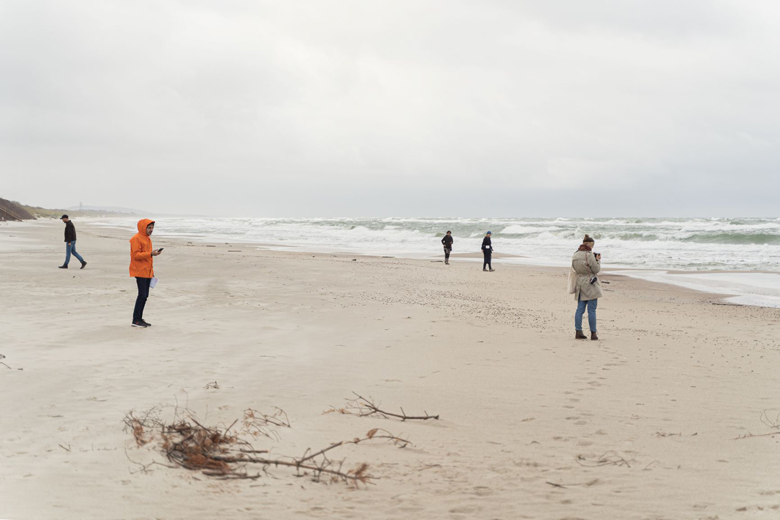 Score for Marginal Objects and a listening exercise with curator Candice Hopkins. Photos by Andrej Vasilenko

The handbook is edited by Rado Ištok and with contributions by Joanna Warsza and Jan Sowa, Shahram Khosravi, Natalia Tikhonova, Anna Karpenko, Candice Hopkins, Eglė Budvytytė, Elin Már Øyen Vister, and the participants of the three-day workshop which took place under the same title at Nida Art Colony in October 2019.

The e-publication Dwelling on the Threshold documents a three-day intensive workshop exploring the notion of thresholds as spaces of passage, flux, and fluidity, as well as blockage in terms of political and personal borders that separate us from others. It brings together photo documentation of the workshop sessions and texts by the workshop tutors, as well as additional texts on phenomena encountered during the workshops, and reflections by the participants on the key concepts of the workshop and their individual experiences at Nida Art Colony.